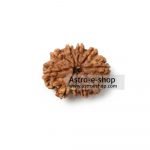 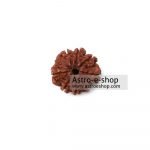 The nine-faced Rudraksha (9 Mukhi Rudraksha) has 9 natural vertical lines on its surface. This Rudraksha is found more in Nepal and Java. It is also a favorite Rudra bead of mother power, and Navmukhi Rudraksha is the representative of the newly empowered Maa Durga. In this Rudraksha, Kapilmuni and Bhairo Dev shower their blessings immensely. It is specially worn as a protective shield, which prevents the wearer from all kinds of evil property, black magic, and negativity. It provides strength and energy to the wearer. Ketu is the ruler of Nine-faced Rudraksha.

Nine-Faced Rudraksha (9 Mukhi Rudraksha) helps in reducing the negative effects of cruel planets. One can wear this Rudraksha to know the depths of the spiritual along with the physical pleasure. Nine-faced Rudraksha is related to Rahu. People who have weak Rahu or giving bad effects on their horoscope, get a lot of benefits by wearing this Rudraksha.

Consult with our world’s best astrologer, Acharya Indu Prakash Ji, he will make predictions about the movements of your planets and informs you about the good and bad times. It will also tell you about the planets, which are negatively affecting your life. Seeing that the astrologer will give you suggestions.

Nine-Faced Rudraksha related to Rudraksha Nau Kauli Nag (Nine Cobra). The person who wears nine-faced (9 Mukhi) Rudraksha after proper Siddhi (purification with mantra and method of charging), opens all the way in front for him in the path of success. This Rudraksha is made up of nine powers and also inhabits nine snakes (snake, cobra). This cures snake bite, for this treatment, nine-faced Rudraksha is immersed in water-filled in a copper vessel. The water is given to such a patient definitely saves them from death.

This Rudraksha period removes the effect of snake yoga. The person who faces too many obstacles or feels inauspicious should wear 9 Mukhi Rudraksha. This opens the luck factor also. Unlike the second Rudraksha, which displays some or other forms of Lord Vishnu, but this bead represents the power of Maa Durga. This Rudraksha works as a home remedy to remove any negative effects of the cruel planets. According to Vedic astrology, planets affect the life of humans. Since the planets are always moving, in terms of astrology, these transits occur from one zodiac to another from time to time. The speed of some planets is slow and the speed of some planets is fast. All these planets change their behavior negatively and positively with every transit.

Wearing it increases wealth, honor, fame, fame, and all kinds of happiness. This Rudraksha should be worn in the left hand or in the throat. This Rudraksha is also considered useful for eyesight. Being on Maa Bhagwati’s infinitely compassionate nine-face Rudraksha, it acts as a shield and protects the body from mental and physical suffering and spreads the fame of the holder everywhere. Wearing nine faces Rudraksha slowly calms the mind and wishes for the welfare of the people. According to Mahashiva Purana, this Rudraksha is very useful especially for women due to the appearance of Goddess Durga. By its wearing, the willpower is strengthened and many sins are destroyed. With the blessings of the Mother Goddess on this Rudraksha, the grace of all the Gods also gets the holder of this Rudraksha, so every man or woman who worships the Goddess in any form must wear a nine-faced Rudraksha. Wearing it can also benefit mental disease and heart disease. Ketu’s effect on this Rudraksha is also considered. The name of the planet Ketu is known to give a sudden and strange fruit, so suddenly the holder of this Rudraksha can have many benefits.

Method of wearing Nine-Faced Rudraksha
Saturday is considered an auspicious day to wear 9 Mukhi Rudraksha. First of all, put Rudraksha in a copper vessel and sprinkle Ganga water on it. Then sitting in the east direction of your temple, chanting the mantra “Om Hri Hoon Namah”, wear Rudraksha, and chant 108 times. If your astrologer suggests you chant some additional mantras then you can work according to yourself. To know more about your planetary movements, consult with the best astrologer Acharya Indu Prakash Ji through Astroeshop.