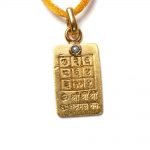 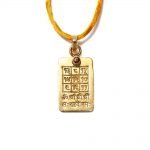 Mangal Yantra
Mangal (Mars) is considered the most powerful planet in the Navagrahas. Mars represents physical strength and mental strength and strength. Its auspicious and favorable position makes the native fearless and courageous. It holds the rank of commander in the Navagrahas. The person in whose horoscope Mars is at the highest position, every work done by them is successfully completed and their honor and respect in the society increase. At the same time, the inauspicious Mars dissolves the poison of amangal in life. Aries and Scorpio signs, Aries and Scorpio ascendant people, and those in whose horoscope Mars are working inauspiciously, to reduce their inauspiciousness, wearing a Mars device is considered to be the best.

Women who are facing problems in conceiving should worship Mangal Yantra. For those who have diseases like blood leprosy, blood defect, any kind of fever, itching, menstrual problem, an ulcer, Mangal Yantra is proved to be very effective.

Mangal Yantra is one the most wanted yantra, every second person needs it. But before wearing it, make sure it should be energized, then only it will give you positive results. Astroeshop provides you most powerful yantra, which is energized by Acharya Indu Prakash Ji.

Mangal Yantra is installed to provide more force to the effect of Mars in a horoscope.
If Mars is negative and inauspicious in your horoscope then you should install Mangal Yantra instead of wearing Mangal Ratna. With the help of Mangal Yantra, the help of Mangal Yantra is taken for the prevention of Manglik Dosh created by the inauspicious Mars in the horoscope. Explain that due to Manglik defects, the native has to face many troubles in marital life. In such a situation, remember not to wear red coral because it increases the outbreak of Manglik dosha.
The auspicious effect of this device increases the strength and might of the native. The native also becomes more mentally capable, due to which the person is able to do many types of tasks more easily and efficiently than before.
Due to the auspicious effect of Mangal Yantra, relations with brothers and friends remain sweet, and chances of progress in life increase. In addition, this device is also used to remove witchcraft. Due to the auspicious effect of the Mars device, the person’s honor and prestige are increased.

Things to keep in mind
While installing the Mangal Yantra, important steps like its purification and life expectancy should be included. The Mangal Yantra does not provide special benefits without making life reputable. Therefore, before installing this device, make sure that it is duly made and has its life reputed. After purchasing Mangal Yantra, after consulting an experienced astrologer, it should be installed in the right direction of the house. If you want to get the best fruit, then install this Yantra on Tuesday.

Method to wear Mangal Yantra
To set Mangal Yantra (Mangal Yantra), first of all, get up early in the morning and after bathing, keep this Yantra in front of you and chant the seed mantra of Mangal for 11 or 21 times ॐ Kran Krani Kra स :a: Bhumayi Namah. After that, sprinkle Ganga water on the Yantra and join hands with Mangal Maharaj and pray that he should provide maximum auspicious results. After installing Mangal Yantra, wash it regularly and worship it so that its effect is not reduced. If you wear this yantra in your wallet or neck then after bathing, worship the above method with the instrument in your hand.
Mangal Yantra Mantra – ां Cranky Cranes: Bhumaye Namah: